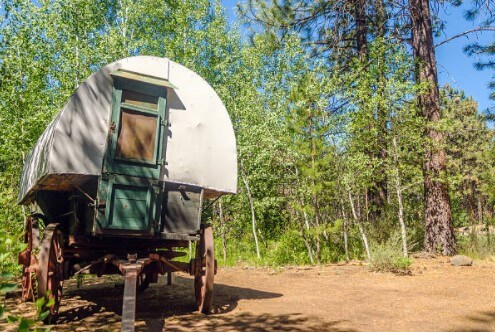 Whenever you take a walk, ride or drive around Bend Oregon, one of the things that will strike you for sure is the unique names given to places and streets. The thing with these names is that they are not only identifiers, but they also go a long way into telling a little bit of this Oregonian gem’s story. Drake Park, for instance, drew its name after being named for Alexander M. Drake, who was one of the city’s frontier founders. Let us delve right into the history of Bend, OR.

Over a century ago, early city pioneers took refuge in the area near Mirror Pond and relaxed there. These pioneers spotted Pilot Butte way into the horizon, and it dawned on them that they were nearing Deschutes River’s meandering banks, which by then was home to approximately 300 settlers. This region went by the name Farewell Bend at the time, according to the pioneers who proceeded with their journey towards the west. November 1904 saw Farewell Bend residents ready to vote for city incorporation, and in 1905, they named the city Bend, dropping the first part of the city’s trademark name.

What followed was what seemed like a fierce race between E.H. Harriman and James J. Hill, two city founders who set the tracks that would later open the city doors to tourism and commerce. Shortly afterward, two of Bend’s largest timber Mills, the Shevlin-Hixon Mill and the Brooks-Scanlon mills were established, making Bend, one of the most successful and prestigious regions to work, play and reside. Bend continued to experience growth, both in industrialization and population, establishing itself as one of the country’s fastest-growing cities. With city naming and incorporation taking place way early in Bend, a system of government only meant that the city was headed in the right direction.

While the mills are no longer in operation as lumber mills, Bend’s vibrant culture and lifestyle as a booming and upbeat town stand to date. The Brooks-Scanlon mill, for instance, is humming to live with the happy sounds of Oregonians enjoying entertainment, shopping, and fine dining in the Old Mill District. Downtown Bend, is forever bustling with annual events, exquisite art, fine dining, and amazing shopping destinations. Relax at Drake Park or enjoy the wild outdoors at Les Schwab Amphitheatre. Whatever your choice of indulgence in Bend, one thing is for sure; everything keeps the culture and tradition of old Bend, giving you that perfect mix of modern and ancient.

And while you enjoy doing research on the history of Bend, OR, if you’re in need of trusted house cleaning, Details Professional Cleaning is here to help. Schedule an appointment to meet our house cleaners. We look forward to hearing from you!

We Don’t Cut Corners – We Clean Them!®

Our goal is to work closely with our clients to evaluate and establish the best service program for their needs while fostering a positive, encouraging environment for associates.

We're not around right now. But you can send us an email and we'll get back to you, asap.